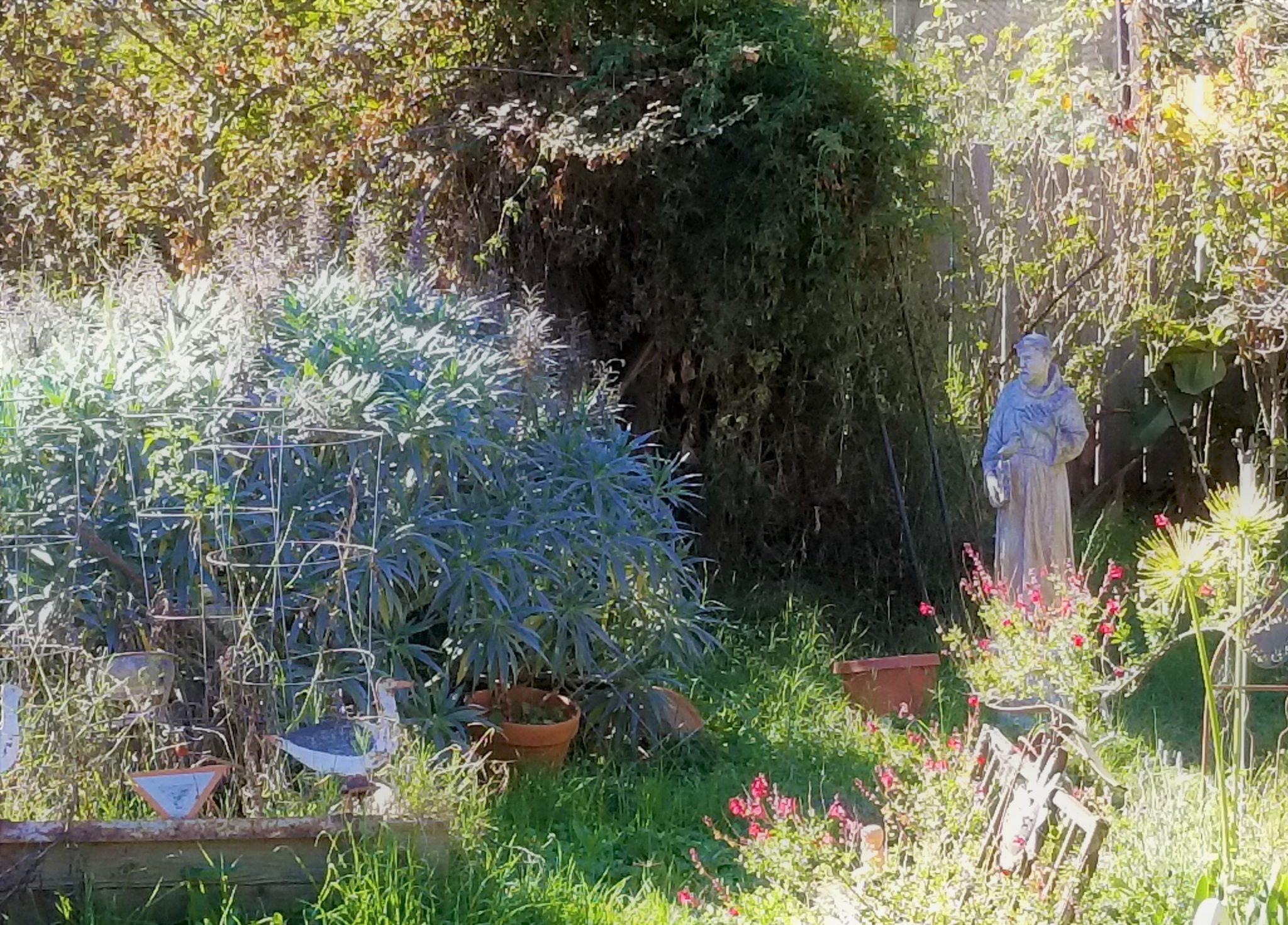 On this busy Saturday morning her chronologically 71 year old body marched responsibly from one appointment/task to the next while her intrepid 17 year old spirit sauntered along, savoring the warmth of early spring.

Finally, back at her sanctuary, she turned off the car. She sat for a few moments, sighing, marshalling herself; then spent a few more minutes collecting proof of her busy morning. Her 17 year old hurried along, impatient to devour both chocolate whipped cream filled éclairs, while the 71 year old promised herself a nap.

Balancing canvas shopping bags and a small pink bakery box, her aging fingers robotically tugged the gate lever, and she stepped into a verdant backyard in wild winter glory.

The 71 year old, trudging down the walkway, vaguely heeded her surroundings; all she saw were weeds. Heaving a vexing sigh, she pulled up the upcoming week’s calendar from memory. She really should aerate between clumps of dandelion, chickweed, purslane and quackgrass so that her precious clusters of royal purple irises could flourish independent of the tenacious invaders. Grudgingly she supposed she could pull weeds on Tuesday afternoon.

The 17 year old’s senses burst with joyfulness and gratitude. Gone was the impatience for chocolate éclairs as her youthful nose twitched at the faint fragrance of early pink heather bushes. In the tall unruly grass, she knew lady bugs and roly-poly pill bugs played together. Graying skeletons of last year’s tomato plants collapsed into each other. The Italian parsley gone to seed, she gratefully remembered many salads and other delicacies seasoned with the fresh herb.

Despite the bogus promise of spring the 17 year old knew there was a pristine pair of brand new, perfectly white sneakers yearning to effortlessly race through a field of tall wild grasses; to be muddied running through forgotten muck; to be stained by ripe blackberry juice dripping from happily stuffed mouths and grubby fingers; finally to be discarded on a back porch, too smelly and too grubby to be worn inside.

For the 71 year old, merciless vision loss necessitated paying full attention to her surroundings that for her safety and well-being, including marking locations of the motley wicker furniture collection that promised a bruised knee or scratched arms or legs for the heedless.

A corner of her vision demanded she pay attention to some off-white synthetic material laying across the round wrought-iron table. The article was large, limp, rectangular. Approaching it cautiously, she relaxed as her vision and mind gelled in unity identifying the unfamiliar.

It was an old throw rug just for kitties. A smelly, off-white throw rug that had been peed on, hastily washed and then tossed outdoors to dry. Had she done that and forgotten?

The fretted landscape below was abandoned as the screeching calls of hawks commanded skyward attention. Shading eyes with hands, she was greeted by the trio of red tail hawks intimately hovering. She listened respectfully as they scolded for being abandoned this past year, having caught no sight of the woman and the old red dog, they had searched, they had worried, and now, finding her, they rejoiced.

Returning their joy and worry, the 71 year old honored her young self, acknowledged the love from these magnificent birds of prey. She had missed them this past year —the hawks and her beloved companion. She appreciated the perfect alignment of her strong capable body with the universe, the perfect day, the perfect moment.