It was mid-week and she was visiting Portobello, just five miles out of Edinburgh’s city center.It had been a popular beach destination a few decades ago, fallen on hard times, and was on its way back to respectability, once again providing inexpensive holiday accommodations for middle class families.

She found herself walking down an alley with residential backyards on both sides. Most had various stages of weather beaten wooden fencing which provided privacy. A few had cyclone fences with 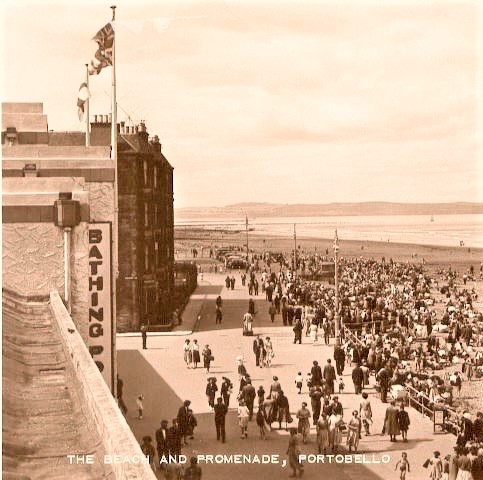 attempts at creating privacy by growing reluctant vines. The back yards were quiet;some were better kept up than others—typical of many neighborhoods.

Emerging from the alley, she found herself in the middle of the promenade; full of pedestrians and an amazing number of dogs and their minders, many dutifully carrying plastic bags filled with brown messes.

The brisk air was perfect beach weather.At low tide children and their parents gathered on beach towels and blankets; kids shouted gleefully as the cold Firth of Forth, meeting the freezing North Sea, touched their toes, sinking them into the sand.

Tiring of the beach and its energetic guests, she ducked into a small café for a quick flat white and a savory made of puff pastry and sausage. Refreshed, she walked through some quieter neighborhoods, away from the beach.

Happily she admired the small front gardens. Many were tended within an inch of their lives and others were wild in overgrown splendor. Still others were a mixture of well-tended alongside permission to grow a little wild. She was soon drawn to one of these.

Actually, what she noticed was a man in his 40s, with light sandy hair and a receding hair line.He wore a faded blue tee shirt with old and comfortable jeans with huge bleach stains splotches.

He stood outside the yard. She noticed a small line of wire brushes on the brick wall. One was large, with a long wooden handle and the other was much smaller with a much smaller handle. He was using a medium size wire brush and was carefully cleaning the rust from his black wrought iron fence. 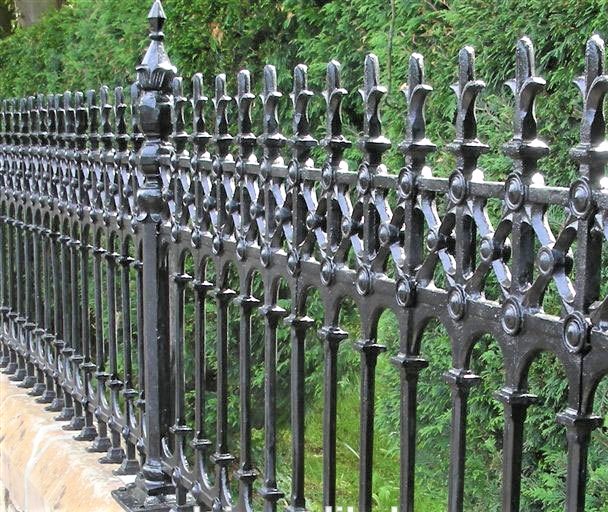 The man was about 5’8” so he had to stand on his tip toes to wire brush the curvature of the wrought iron, the fleur de lis design on the top of each spike. The whole garden looked cared for and felt like a sanctuary.

The yard beyond the wrought iron was full of fat, late roses in pale yellows and white blooms with pink tips. A wood lattice was attached to the wall on the left side of the front door that was painted a merry Christmas red. The lattice was covered with spent morning glories that may have been that heavenly blue color. There were three huge terra cotta pots full of bright red geraniums accentuating the short  walkway.

“That looks like hard work,” she ventured. She smiled admiringly at the ordinary looking man as he diligently wired brushed his fence.

“Oh, aye.’Tis not. Just a bit o’ time.” He replied, flushed that she would notice his hard work.

Reverently stroking the two brushes laying on the brick wall, she asked curiously, “So you use three different sizes of wire brushes to do this work?”

She noticed a small can of glossy black paint with a clean two inch paint brush sitting on top. “And paint too?”

He blushed. Clearly no one had ever asked him about this work.

He nodded, smiling shyly, holding out the medium size brush for her to touch. “This is used to get the tops up here.”

He indicated the pointy end of the fleur de lis.

Slowly her fingers rested on the brush; she wondered if a porcupine felt like this. The brush was stiff, the wire unyielding and coated with rust colored dust.

He picked up the largest brush. “This I use just to loosen up the dirt and grime.”

His head flicked to the smallest brush. “That’s for the nicks and crannies, down here, by the base, where the iron meets the brick and up there, inside the curves.”

His eyes traveled up to the fleur de lis again, and she saw what he meant about the curves. Her fingers trailed around the base of the iron and the brick.

“Sometimes I’ve touch up painting to do.” He completed his account, taken aback by her interest.

“Wow. Impressive.” She said, smiling into his shy face, “That’s a lot of work.”

“How often do you have to do this?” She really wanted to know.

He shrugged his shoulders as if it was not a big chore, “Oh, not often. Maybe every three years.”

And she went on her walk, turning to look back halfway up the block. He’d been watching her, his left hand on his hip, his right still holding the medium size wire brush.

She waved cheerfully.He chuckled and waved back, inordinately happy.