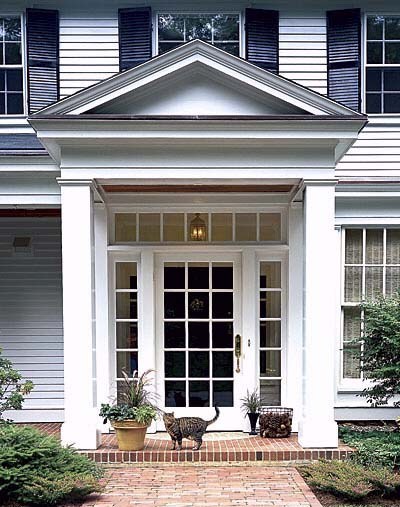 It’s the porch leading to an entrance of a building, or colonnades with a roof over a walkway supported by columns or enclosed by walls.

What I like about the idea of a portico is that it gives me a moment or two of breathing space between the outside world and opening the door to enter an interior world that may or may not be of my choosing. We all have go to open doors to go in to a space that may be safe or not; or maybe we just don’t know what the temperature indoors may be.

OR we’re already inside, and we want to get out and can’t. What happens then?

Last winter I dreamt of a massively solid arched oak door. I wanted the door to open but there was no keyhole. Upon further examination, I noticed there was no doorknob either. The door was so massive and huge I could not pound, kick or claw my way out. I also felt no one would hear me screaming for help.

We’ve probably all had dreams like this and I won’t go into any analysis of what that door represented.
This dream disturbed for months. I found myself ‘seeing’ that door in my waking hours, massively solid. Closed. Unmoving. I really wanted to get out of that place, wherever that was.

So last Thursday, six months after initially having that dream, during a quiet moment, I was in a reflective meditative mood. Immediately the oak door flooded my vision. My quiet time was being overrun by this dream.

Stubbornly, then, I stayed with the image. I felt and smelled the old musty oak. If I rubbed the palms of my hand against it, I would end up with splinters. It still had no keyhole or doorknob. I stood right in front of it, gazing upwards and almost couldn’t see the top of it.

Then my intuition said, ‘step back.’

I took a step backwards. Nothing changed. Determined, I took another step back, then another.

I took five steps backwards before I saw the entire door, something I’ve never done before. That’s when I noticed the top of the door was arched.

I was then stunned to realize I was just looking at a door.

There were no walls on either side of it. This massive door was rooted in the ground. All this time I could have walked around the left of the door or the right of the door. It was just a door.

For months this dream had troubled me and all along it was just a matter of me stepping back. To get another perspective, another choice, instead of trapping myself.

The opposite of the portico, allowing me a few moments before I entered the interior of the building. I had to create that few moments, step back, look at the whole picture.

I have to tell you that I’ve been feeling hugely boundless since Thursday. A weight has been lifted. I have more room in my brain that isn’t taken up by that dream.

And yes, that feeling of being trapped behind the oak door? Well, you all know what that was about. FEAR.